The APTR Healthy People Curriculum Task Force is planning its data collection efforts for Healthy People 2030. The Task Force educational objectives tracked for 2020 were reduced from 8 overall with 42 sub-objectives, to 6 overall developmental objectives (below) for Healthy People 2030.  It is anticipated these objectives will be reduced to two(2) objectives, including one composite objective that combines all the health professions disciplines into one denominator.  The two objectives will measure clinical prevention and population health content in health professions schools and training programs, and interprofessional learning experiences in prevention for students in health professions education programs. Health professions schools represented by 7 associations will be surveyed between September 2021 and April 2022 to produce baseline data and convert the proposed objectives to core objectives. Detailed data analysis of data will be posted in June 2022 (baseline), June 2026 (mid-decade) and June 2030 (end-of-decade).​
healthy people 2010
​When Healthy People 2010 was released in 2000, Objective 1.7 was a “Developmental Objective.” Developmental objectives did not have national baseline data or operational definitions at the time Healthy People 2010 was first published, but identified areas of emerging importance. Developmental objectives were intended to stimulate the identification or creation of data systems to measure them; if no baseline data were available for developmental objectives by mid-decade, the developmental objectives would be eliminated.
​
Among the Task Force’s seven initial health professions groups, the availability of pre-existing data collection activities to track curriculum content varied. AACOM and AAMC could assess curricular content annually through institutional surveys that are required to maintain accreditation. Both of the physician education groups also could indirectly assess curricula through annual surveys of their graduating students. AACN and NONPF did not have regular surveys in place, but had fielded surveys in recent history that could provide baseline data. Because the other organizations did not have baseline data available, the physician (AACOM, AAMC) and nursing associations (AACN, NONPF) used their data sources to provide the required baselines at the midcourse review.  “Counseling for behavior change” and “cultural diversity” were the content areas with data available for all four professional groups, and were chosen as the “sentinel” domains to be measured for Healthy People 2010. In light of the limited subject areas that were chosen for tracking, the wording of Objective 1.7 was revised during the midcourse review to “Increase the proportion of schools of medicine, schools of nursing, and other health professional training schools whose basic curriculum for health care providers includes the inclusion of sentinel core competencies in health promotion and disease prevention in health profession training.”

The four participating associations agreed to track the number of schools or programs that included the sentinel domains in their required curricula (as opposed to including the content in elective opportunities only). The standard “10% improvement” goal was applied to all of the sub-objectives, resulting in a 100% end-of-decade goal for the sub-objectives that had very high baseline levels. At the end of Healthy People 2010, all four groups had made improvements, but not all had reached their assigned end-of-decade goals. 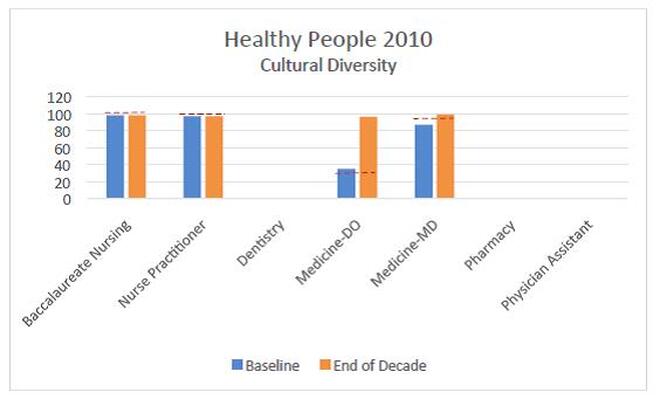 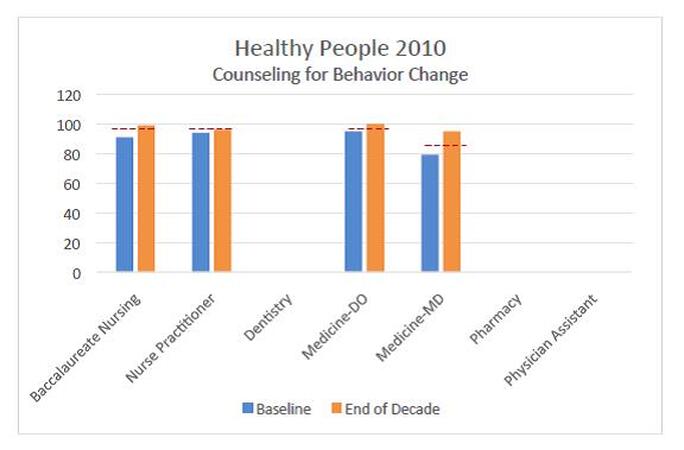 Healthy people 2020
​A Data Collection Working Group of the Task Force, with representatives from each profession, identified the Clinical Prevention and Population Health Curriculum Framework content areas that the Task Force would track for Healthy People 2020. The Working Group elected to reflect the breadth of the Framework, and to include topics that traditionally have been omitted in health professions education.  The six topics tracked for Healthy People 2020 were: counseling for behavior change; cultural diversity; environmental health; evaluation of health sciences literature; global health; and public health systems. The chosen domains represented all four components of the Curriculum Framework and included the two domains that were tracked for Healthy People 2010.

The curriculum tracking objective was moved from the Healthy People 2010 “Access to Quality Health Services” topic area to the Healthy People 2020 “Educational and Community-Based Programs” topic area. The wording was revised to more accurately reflect the information that would be followed through the decade: “Increase the inclusion of core clinical prevention and population health content in health professions training.” In addition to the two nursing and physician groups, the Physician Assistants, Pharmacy, and Dentistry groups also collected data for Healthy People 2020.

Findings
The baseline data for Healthy People 2020, reflecting the proportion of schools or programs that featured the content area in required curricula, ranged from 46% to 100%, depending on the topic and profession. At least 93% of schools across the represented health professions required studies in the evaluation of health sciences literature, counseling for behavior change, and cultural diversity. Global health was the least likely topic to be included in required curricula across health professions. 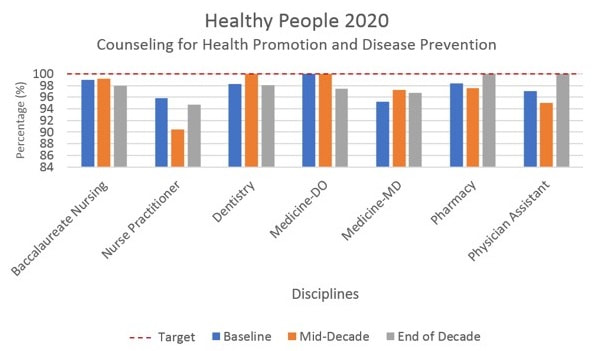 Graph 2 -- Cultural diversity was facing a downward slide at mid-decade but was well-represented in curriculum by the end of the decade. 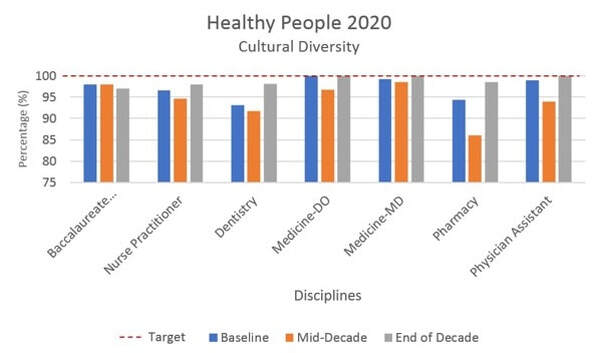 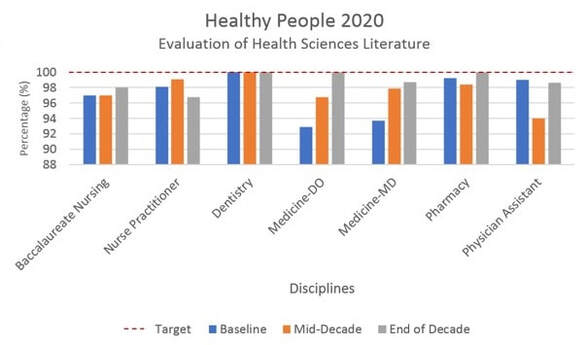 Graph 4 -- Environmental health had variable representation across professions but improved over the decade. 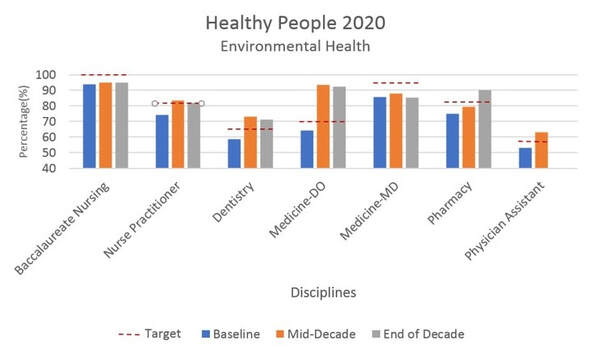 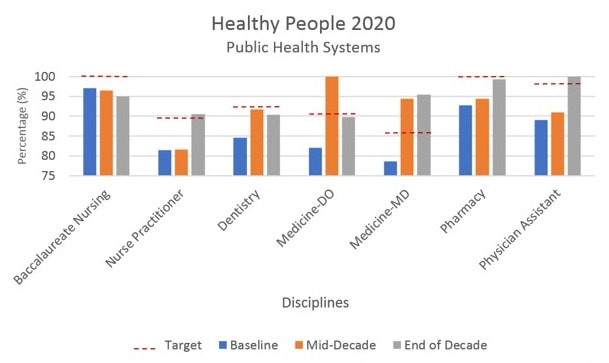 Graph 6 -- Global health had variable representation across professions but improved over the decade. 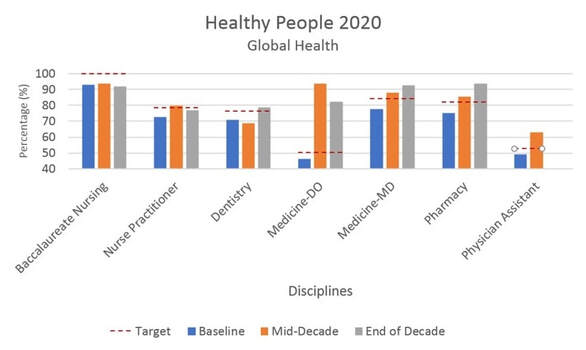 Limitations exist for this data. Comparisons across professions were discouraged because of the use of different survey instruments, different response rates, and reliance on self-reporting. Nevertheless, Baccalaureate Nursing (AACN) curricula appeared to have the most robust presentation of the tracked content areas. AAMC’s data source had a 100% response rate because completion was a requirement for accreditation. The response rates for the other instruments ranged from 70% to 100%. Because of variation in denominators across the professions, some of the changes may have represented a small number of schools' change in response, which may not represent a trend.
healthy people 2030
Healthy People 2030 was launched on August 18, 2020.  The initiative's fifth edition builds on knowledge gained over the past 4 decades to address current and emerging public health priorities and challenges.  These objectives focus on the most high-impact public health issues, and reflect an increased focus on the social determinants of health — how the conditions where people live, work, and play affect their health and well-being. With considerably fewer objectives and higher data standards, Healthy People 2030 is more focused and rigorous than previous iterations of the initiative.